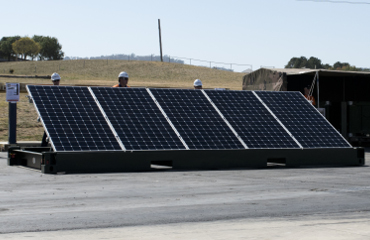 The Container Roll-Out Solar System (CROSS) is a factory assembled relocatable solar array. CROSS is freighted in standard 20 ft and 40 ft shipping containers, and can be rolled out using a forklift and setup on site within minutes of being delivered. CROSS was developed to reduce the logistics and construction burdens associated with deploying solar PV generators, and is suitable for a range of applications from small sites, such as water bore pumps, through to utility scale projects by large electricity providers.

Following its own experiences placing diesel generators and resupplying fuel in remote locations, ECLIPS identified a need for solar PV generators that were logistically just as easy to deliver and mobilise. ECLIPS’s objective was to design a relocatable renewable power solution that could leave the factory and be delivered anywhere in the world ready to connect with minimal or no civil works, and be quick and easy to setup. With funding assistance from the Australian Renewable Energy Agency (ARENA), ECLIPS developed the CROSS.

CROSS are available in 20 ft and 40 ft configurations (CROSS20 and CROSS40), and can be stacked seven high during transportation, secured to each other via twistlocks, and rolled into or out of ISO shipping containers. Reusing ECLIPS’s patented Container Roll-Out Warehousing System (CROWS™) design, the CROSS can be lifted by forklift at one end and rolled into a shipping container on its heavy-duty rollers. CROSS are fitted with torsion springs at the bottom of each array, which supports raising the panels through the 10/20/30 degree angles. The lifting of the arrays to the required angles is measured in seconds.

CROSS are delivered to site pre-assembled and pre-wired to DC isolators, and are generally matched to containerised Energy Storage Systems (ESS), which includes inverters, batteries and control systems. This means the entire solar or hybrid system can be picked up by forklift or sideloaders and moved to the next site, without the need for refits or refurbishment. The CROSS has undergone rigorous factory acceptance and performance testing to ensure the solution survives multiple relocations. Such testing included load stress tests and transportation over sealed and unsealed roads as part of reliability testing. 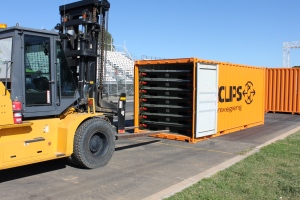 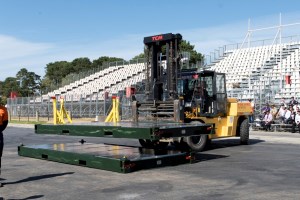 ECLIPS supply CROSS with five SunPower 435W PV modules per CROSS20, and ten per CROSS40, which retain SunPower’s warranty conditions when fitted. ECLIPS can also supply the CROSS mechanical frame without PV modules to customers who wish to fit their own modules. The CROSS is structurally certified to suit installations in AS/NZS1170.2:2011 Wind Regions A to D. Although certified for Region D, it only takes seconds to lower the array flat from its 10/20/30 degree angles, which serves to reduce the risk of panel damage when extreme winds are forecast. Additional ground restraints are required in some areas, which can include pre-fabricated concrete sleepers in environments not suitable for ground penetration, such as landfill sites. CROSS can also be secured to screw piles and other restraint options. 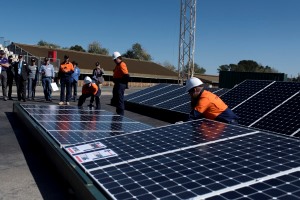 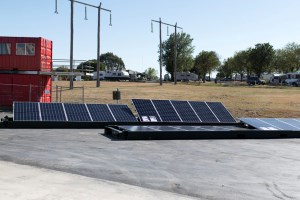 One of ECLIPS’s initial goals in developing the CROSS was to improve self-sufficiency of forward operating bases of deployed Defence Forces. US Department of Defence case studies revealed that electricity accounted for up to 70% of fuel use on operations, and in some cases at a cost of almost US$100 per litre. When ECLIPS discussed these results with some of its resource sector clients, they cited similar examples of the cost of fuel for their international mining operations where fuel had to be airlifted in. However, the greatest benefit in energy self-sufficiency through solar PV or hybrid solutions in contested military operations has nothing to do with cost reductions. The reduced fuel replenishment cycle means less convoys on the road, reducing the risk of vehicle accidents and exposure to improvised explosive devices or unplanned engagement with enemy forces.

But it’s not just our Defence Forces that CROSS is suitable for. CROSS is ideal for project sites where the cost or difficulty in performing significant civil works is excessive. CROSS requires minimal ground preparation, as it is a free-standing mechanical structure. This drawcard has appealed to a range of users from mining clients working in remote locations, to humanitarian aid agencies providing medical facilities in international locations, and even for energy suppliers requiring additional power generation at fringe of grid, or to replace infrastructure after natural disasters. The CROSS also appeals to energy financing companies due to the ability to repossess the asset from an insolvent client. 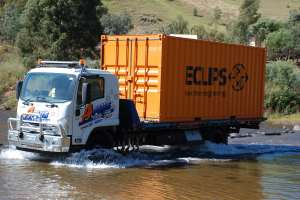 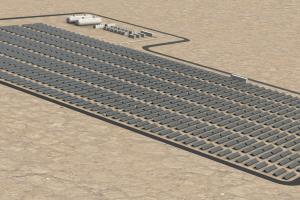